We will be delivering two training sessions for future Stevenage entrepreneurs from the Black, Asian and Ethnic Minority communities (BAME).

Why a BAME Business Bootcamp?

The two sessions will equip local people with the skills to set and develop a business.  The report  A “Portrait of modern Britain said “there are higher aspirations to start-up amongst ethnic minority groups, especially Black African (35%) and Black Caribbean (18%) groups (compared with 10% for White British), but ‘conversion’ remains very low.” – it is this issue that the Red Potato Business Bootcamp on the 18th and 20th June, will address.

We will be running some taster sessions at the Stevenage Day on the 12th June.  Red Potato will be in the big tent with Herts CDA and Stevenage World Forum – which will be cosy!  So if you are in Stevenage, Herts on the 12th June do come and say “hello”! 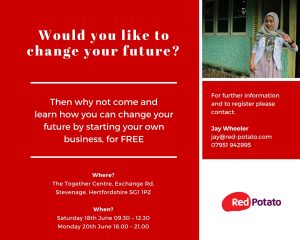